A Brief History of Hycroft

In June 1962 the University Women’s Club of Vancouver acquired Hycroft, a magnificent Edwardian mansion located in Shaughnessy to use as its Clubhouse.  The house was originally built for Alexander Duncan McRae, a leading businessman and politician in Western Canada at the beginning of the twentieth century.  McRae wanted to make his new home a spectacular showplace in Vancouver and enlisted the services of Thomas Hooper, a renowned Western Canadian. Hooper’s other designs include the Winch building, now the Sinclair Centre, and the Provincial Court Houses in Vernon and Revelstoke.

1909 – 1911 Construction began on Hycroft in 1909 and was completed in 1911. In addition to the present house and coach house, there were stables, a swimming pool, an Italian garden, a tea house, pergolas, statuary, and a children’s playhouse. When the McRae family moved into Hycroft in the summer of 1911 it quickly became the centre of the social scene in Vancouver.

1911 – 1941 The parties held at Hycroft were legendary, especially the New Year’s Eve masquerade balls. The guest book at Hycroft read like a Who’s Who of the 20’s and 30’s and contained names of visiting royalty, well-known business associates, politicians and the social elite of Vancouver. It was said to be an honour and a delight to be invited to Hycroft.

In 1942, during the Second World War, the family had grown and left.  The McRaes donated Hycroft to the Federal Government for one dollar for use by the Federal Department of Veterans’ Affairs as a convalescent hospital for war veterans. Mrs. McRae died soon after and Senator McRae died in Ottawa four years later.

To learn more about the McRaes and Hycroft, Merchant Prince by Betty O’Keefe and Ian MacDonald provides an excellent and comprehensive history of the McRae family. 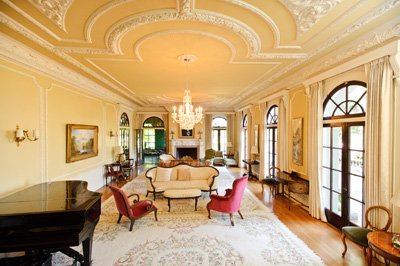 In 1962 the five-acre property originally owned by the McRaes was subdivided and the stables were demolished. This made it possible for the UWCV to purchase part of the estate which included the 30-room house, coach house, mews cottage and surrounding grounds. At that time women were not allowed to hold a mortgage in their own right so the Club was required to pay in full.

It took one year for the UWCV to finalize the purchase of Hycroft, and five more to restore it. The building had been empty for two years, unheated and without any basic maintenance. The grass was waist high and blackberry vines were growing through the walls. Raccoons had taken up residence and the house interior was a mess. Through many volunteer hours, along with furniture donations from generous members and friends, the Club members turned Hycroft into a home once again.

In December 1974 the UWCV was given an award of merit from the Vancouver Historical Society for the historical and architectural preservation work they had done at Hycroft. The UWCV has also received recognition from the City of Vancouver; in 1994, the Club was given a Heritage Award from the City for their continued maintenance of the house.

Club members embrace the role of stewards of Hycroft and the surrounding property. Together with the management staff of the Club, a House Committee oversees the maintenance of the house and the gardens. The gardens that exist today at Hycroft reflect the work of Club members since 1963.

Restoring and maintaining Hycroft has become a great source of pride for the UWCV. Club members have turned a once crumbling building into a warm and welcoming place for members and their guests. Realising the enormity of the challenge to fund continued maintenance of Hycroft, the Hycroft Heritage Preservation Foundation was formed in 1991. Members and non-members can donate to this worthy charitable foundation to ensure ongoing preservation of Vancouver’s and our treasure.

The Gardens of Hycroft

The Club Garden Committee has created a spectacular video that briefly tells Hycroft Garden’s history and the relentless maintenance of this group of women. Click on the link below and learn more about the garden’s different eras, styles, maintenance and more.

Created by the UWCV Garden Committee.

Get Social With Us

Click here to receive our monthly e-newsletter and stay informed of features and highlights happening at the UWCV at Hycroft.

Contact us about Membership, Our Work and Rentals Learn More